First off, let's talk a bit about terminology. In some ways, the name "classical guitar" is a bit misleading, though its usage is understandable. It is not an instrument that is used only for classical music, although it is generally the case. While a wide range of repertoire has been adapted for guitarists' use, many composers - such as Fernando Sor and Heitor Villa-Lobos - are noted for their music specifically composed for the guitar. Still, the modern classical is often used in folk, flamenco, rock, pop, and even country music although not necessarily with strict classical technique. 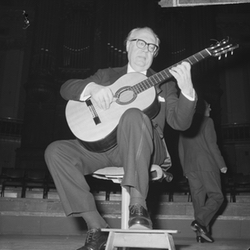 The Influence of Segovia

Without question, the popularity of the guitar as a concert instrument is due to the work of the Spanish guitarist, Andrés Segovia, who helped make the guitar a respected concert instrument. A self-taught guitarist and known for both his virtuosity and his stringent teaching style, Segovia's mastery of the instrument helped propel the viability of both performance and study of the instrument. Segovia also taught numerous celebrated guitarists such as Eliot Fisk, John Williams, and Christopher Parkening.

The modern incarnation of this instrument is generally attributed to the Spanish luthier and guitarist Antonio de Torres. In fact, de Torres's designs are the basis not only of nylon-stringed guitars but most steel-stringed acoustic guitars as well. Torres helped standardize everything from body shape and depth, string length, and internal bracing, all of which contribute to the guitar's viability as a respectable concert instrument. 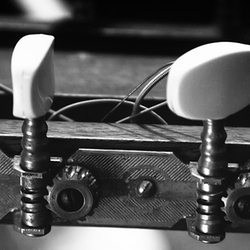 The predecessors of the modern classical instruments used sets of strings called courses, which are adjacent strings that are tuned to the same pitch or an octave apart. Their close proximity allows the player to pluck the strings simultaneously. A modern steel-string 12-string guitar or mandolin is an example of an instrument that uses courses.  The modern classical nylon-string guitar, however, depends on single strings, tuned primarily in standard tuning (E-A-D-G-B-E), though alternate tunings are sometimes used, especially in more contemporary repertoire.

As opposed to playing the steel-stringed acoustic or electric guitar, which may be played with the fingers, a pick, or both, classical technique - assuming one is playing according to accepted standards - involves using the thumb and fingers and the nails. The strings are generally plucked, rarely strummed, though a specific strumming technique known as "rasgueado" is used in flamenco styles. The pinky finger is seldom used.

So Much Guitar › Classical Guitar