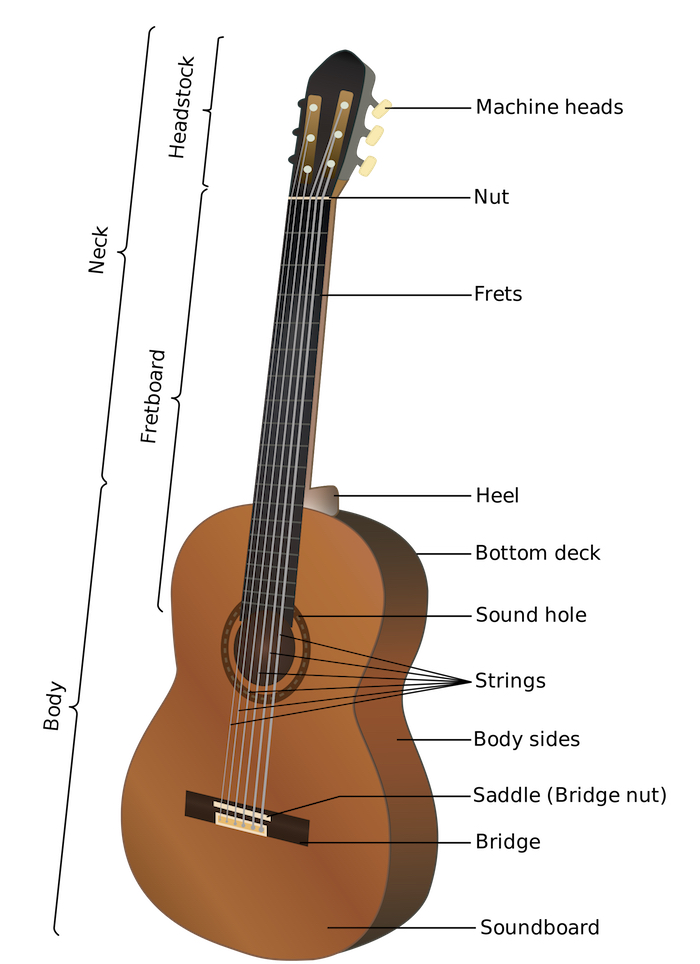 Classical guitar construction generally involves four main areas: a guitar's sound, playability, durability, and aesthetics. Any builder (also known as a luthier) must concern himself or herself with all of these components for a classical guitar to be worthy of its owner.

Perhaps the most significant element that contributes to the guitar's sound is the body wood, especially for the top. A cedar guitar top for example will have a much more warm and "round" sound whereas spruce has a brighter sound. Rosewood is a common choice for the back and sides.

While wood choice is certainly significant, a guitar's sound is forged by many factors, such as the type of bracing used, the finish, and the strings. It is important to understand how these many choices affect the guitar's sound.

While sound is certainly paramount to any instrument, as any guitarist will tell you, a guitar's playability (also known as its action) is incredibly important. After all, if a guitar is too difficult to play, then the guitarist will spend more time fighting the instrument rather than actually making music.

Although many players don't think about an instrument's durability, if a guitar isn't constructed well enough to stand the test of time or even the stress that strings place on the neck. As long as a luthier or designer follows basic tenets, a properly-constructed guitar will likely outlive both the luthier and the player.

Although luthiers needs to be concerned with basic design concerns to ensure a long-lasting instrument, even mass-produced guitars today are made with enough care to last for years. In short, unless you purchase a guitar from a friend who's just made his first guitar, you likely don't need to worry about a guitar's durability. That said, it's always important to store your guitar properly and maintain a proper level of humidity in your home.

Although a guitar's aesthetics don't directly affect a guitar's sound or playability, they nevertheless contribute to the instrument's perception by both the player and the audience.  In some ways, a classical guitar is traditionally limited with respect to the level of ornateness because classical players tend to prefer more subtle designs. For example, classical guitars lack inlays, which is often a distinguishing feature of steel-string acoustics or electric guitars.

Still, the grain of the top wood as well as rosette and headstock design (including even the tuners) all contribute to a classical guitar's aesthetics and when chosen with great care can make a significant impact on the instrument's beauty.

Like any instrument, a classical guitar's construction defines its sound. If there's something you'd like to add to this conversation, please let me know. I'd love to hear from you!