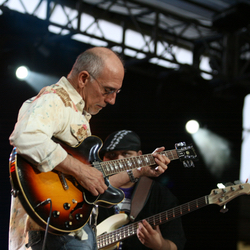 Perhaps more so than another other genre, jazz requires its adherents to have a solid grasp of both practical and applied theory. Jazz is easily the most rhythmically, harmonically and melodically complex music around. While "learning" the guitar can be relatively easy in more popular forms of music, jazz (if played well) requires a much higher level of musicianship that is typically found in other genres, though there it isn't difficult to find rock players with astute jazz sensibilities and vice versa. It takes players years to master the elements necessary to play jazz at a high level.

The Rise of Fusion

One of the most popular forms of jazz in the contemporary music world is fusion, which refers to the marriage of jazz and rock styles. For example, a typical fusion tune may involve more sparse harmonic changes so a soloist can explore different modal variations. In other words, rock chords, jazz soloing (though it's not quite that simple). For a guitarist, he or she may approach the instrument not unlike a heavy rock player regarding their tone, though the lines played are generally more complex than typical rock licks. Popular fusion players include Allan Holdsworth, Frank Gambale, Larry Carlton, and Scott Henderson. 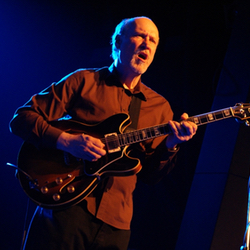 Traditionally, jazz players  used large hollow body guitars like a Gibson ES-175 (generally with flatwound strings) through super clean amplifiers such as a Roland JC-120 or Polytone Brute. However, many players such as Joe Pass, Ed Bickert, and Ted Greene used solidbody instruments like the Fender Telecaster with great success.

Today, there are no strict rules about the type of guitar or amplifier one uses, though most players will favor a warm-voiced neck pickup through a clean amplifier when playing traditional jazz. For fusion players, however, there are more options, including a wide array of effects devices as well as more rock-flavored amplification.

So Much Guitar › Jazz Guitar