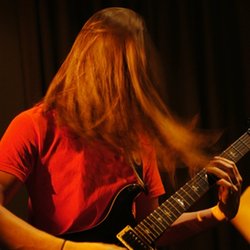 Without question, the history of rock music and rock guitar are inseparably intertwined. If you remove the electric guitar from music history, it's doubtful that rock and roll would have even existed . . . sort of like Marty McFly fading at the end of "Back to the Future" before he played that killer version of Johnny B. Goode! From Chuck Berry and Bill Haley to Van Halen and Yngwie Malmsteen, the sound of the electric guitar is pretty much synonymous with rock music.

What Makes Someone a "Rock" Guitarist?

If you're interested learning more about the role of the guitar in rock music, you'll need to know more about the players who have contributed to the popularity of the instrument, as well as their unique styles and sounds. How can both George Harrison (The Beatles) and Phil Collen (Def Leppard) both be called "rock" musicians since their styles are incredibly different? Are there essential and easily identifiable criteria that help distinguish a rock player from, say, a blues or pop guitarist?

Role of the Blues

At this point, it's worth acknowledging that rock music wouldn't even exist if it weren't for the blues. Many of the same patterns exist in both kinds of music (chord progressions for example) because the blues is a direct ancestor of rock. You'll find that many rock players are also very skilled blues players and vice versa. Some guitarists such as Eric Clapton, Jeff Beck, Jimi Hendrix, David Grissom, and Joe Bonamassa could easily be labeled rock or blues guitarists. Even bands such as AC/DC have a lot in common with the blues. Still, there are specific stylistic differences that make rock players distinctive.

The Sound of Rock Guitar

In addition to the unique playing styles of numerous guitarists, rock-oriented guitar playing has its sound that makes it distinct from blues or country, although there is often some overlap between these styles, especially in more recent years. Although there are exceptions, the sound is usually characterized by an aggressive overdrive or distortion sound, achieved either through traditional electric guitar amplification or through external electronic devices in the form of pedal or rack-mounted effects. Popular amplifier choices for rock players include Fender, Marshall and Mesa Boogie and common guitar options include the Fender Stratocaster and Gibson Les Paul.

On top of its characteristic aggressive tone, rock-oriented players generally employ a wide range of additional effects devices in order to get unique or non-traditional sounds. Although non-guitarists or non-musicians may not know what a flanger is or how it affects the sound, they know that the introduction to Heart's "Barracuda" has a cool "woosh-woosh" sound or that Van Halen's "Unchained" has a sound that's different from most other Van Halen tunes. Some guitarists (e.g. the Edge of U2) have made effects a significant and even necessary component of their style and sound. Still, some players are decidedly "old school" and have nothing between their guitar and amplifier except a guitar cord, relying solely on their hands and the guitar's built-in controls to achieve their sounds.

Please check out our numerous resources that offer a much more detailed history of the role of the guitar in rock music as well as numerous free lessons, tabs, licks, and book recommendations! And if you'd like to add to the conversation, feel free to fill out the comment form below.

So Much Guitar › Rock Guitar