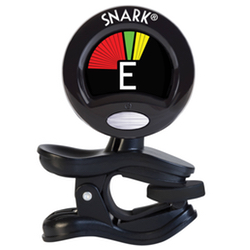 Guitar tuning, like playing the guitar itself, is relatively easy to learn but fairly difficult to master. Many beginning guitarists are initially put off by how difficult it is to get the guitar in perfect tune, but once you understand a few basic concepts, tuning the guitar isn't that hard, so long as you grasp that with a guitar perfect tuning isn't possible, given the temperament of the instrument, but we'll talk more about that later.

Two Methods to Tune a Guitar

Broadly speaking, there are two ways to tune a guitar, either by using the guitar itself as a reference point (once you've established at least one note by an outside instrument) or by using an electronic tuner. I think it's important for every guitar player to know how to tune a guitar by ear, using just a reference tone (like a piano or tuning fork) to get started.

While knowing some ear-based tuning method is important, it's a simple fact these days that true professionals (whether guitar repair shops or players themselves) nearly always use digital tuners.  Such tuners are simply far more accurate than any human ear, and they make tuning the guitar a much easier task. Not only are digital tuners more accurate, but they are also relatively inexpensive.

Available in stand alone or pedal format (or even as smartphone apps), a high quality tuner can make tuning and intonating (more about that later) an instrument much easier. A popular choice among many players are so-called contact tuners, which actually attach themselves to the guitar's headstock and provide accurate tuning from the guitar's vibrations. These tuners are relatively unobtrusive and inexpensive.

This is just a brief introduction on the issues involved with tuning your guitar. Please feel free to ask any questions about tuning, intonation, or the proper tuner for your needs!

So Much Guitar › Guitar Tuning