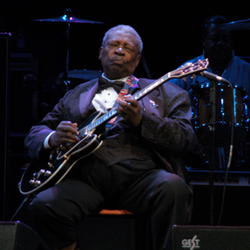 Blues guitar is inseparable from the rise of the blues itself, a distinctly American art form. With roots in gospel and African music, the blues is defined by its distinctive 12-bar structure as well as its melancholic sound, generally achieved through the usage of minor scales, particular the minor pentatonic (as opposed to major scales, which have a more "upbeat" sound). Having evolved considerably from its agrarian roots, the blues is now a popular art form that appeals to a wide range of listeners.

In addition to being a popular and respected art form in its own right, the blues has influenced nearly all forms of popular music, including rock, jazz, and even country. Believe it or not, hard rockers such as Eddie Van Halen and Slash owe their basic musical vocabulary to the blues. You can often find blues licks from players like BB King, Freddie King, and others that have been appropriated by rock, pop, and country players. Although the sound and techniques are distinctive, many rock, jazz, and country licks are direct "descendents" of blues licks.

Evolution of the Blues

Like any art form, the blues - including the role of the guitar- has evolved considerably from its humble beginnings. Originally, guitarists relied on acoustic instruments, often played with a makeshift slide such as a pen knife or bottle. With the rise of the electric guitar, musicians such as Albert King, BB King, and Muddy Waters helped redefine the instrument, emphasizing string bending and vibrato over slide techniques.

The Sound of Blues Guitar

As the blues continued to mature, players supplemented the basic sound of a guitar through an amplifier with numerous effects devices and constantly experimenting with their sound, Stevie Ray Vaughan being a notable example. Although many players still prefer acoustic guitars, the electric is the primary instrument for contemporary players.

Although traditionally a distinctly African-American art form, the blues has extended its influence to musicians - including guitarists - from a wide variety of backgrounds. From the English blues/rock guitarist Eric Clapton to the American-born modern blues icon Stevie Ray Vaughan, playing the blues is more a matter of feel, style, and technique than one's heritage.

Our site contains numerous resources on everything from a more detailed history of the blues and the role of the guitar as well as free lessons, player biographies, and book recommendations. We also provide counseling on finding the best guitar gear for blues players from beginning to advanced.

So Much Guitar › Blues Guitar