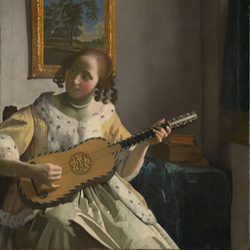 c. 1400 - The Spanish vihuela, an ancestor of the guitar, becomes popular in Spain, Italy, and Portugal.

c. 1500 - The five-course instrument the guitarra battente appears in Italy, using a A, D, G, B, E tuning, reflecting the top five string tuning of the modern guitar.

c. 1600 - The guitar becomes a six-course instrument and eventually evolves into six single strings. Interesting to note that the 12-string guitar actually preceded the 6-string guitar!

c. February, 1778 - Spanish composer and guitarist Fernando Sor is born. Widely considered a first-rate guitarist during his lifetime, his compositions would become some of the most renowned pieces of music composed specifically for the guitar.

c. 1850 - The guitar underwent  its most serious makeover to date when Spanish luthier Antonio Torres Jurado who made several significant changes that would allow the guitar to become a viable concert and solo instrument. He increased the guitar's size and also focused on the soundboard as the most significant component of the guitar's construction, making it lighter and thus more resonant. He also used a system of fan-bracing that increased the instrument's strength while also decreasing its weight.

1893 - The great classical guitarist Andrés Segovia is born in Linares, Jaén, Spain. A self-taught guitarist, he would provide detailed transcriptions of classical composers' works as well as commission works for his own use. He directly taught many of the world's greatest classical guitarists, including John Williams, Eliot Fisk, and Christopher Parkening.

1909 - Segovia's first public performance in Granada. He was only 16 years old at the time.

c. 1928 - Brazilian composer Heitor Villa-Lobos is commissioned by Segovia to write a study for the guitar. The result was Villa-Lobos's 12 Etudes, considered some of the finest contemporary music composed for the classical guitar.

1941 - John Williams is born in Australia. Though he would later be critical of Segovia's methods, he is nevertheless one of the Maestro's most celebrated students and is renowned for his flawless technique.

1954 - Eliot Fisk, the last direct pupil of Segovia, was born in Philadelphia. Known for a vast repertoire, Fisk is also a dedicated instructor. A graduate of the Yale School of Music, Fisk founded the Yale Guitar Department upon graduation.

I've tried to included many significant moments in classical guitar history in the above timeline, but if you think I've omitted something important, please contact me and let me know. I'd love to hear from you!