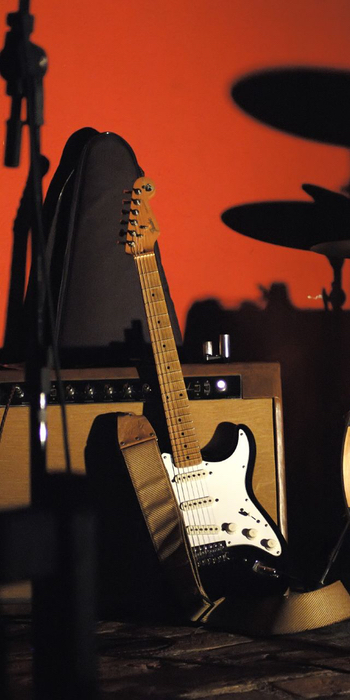 Once you start studying and buying guitar gear, you quickly learn that the guitars themselves are only part of the picture. Most guitar players, whether they favor acoustic or electric guitars, supplement their sound with different amplifiers, effects devices, tuning aids, and so forth. Knowing more about these gear "extras" can help you discover your sound and establish your individual musical identity. Even more - once you really dive into the deep waters of amps, pedals, and guitars, you just might find yourself addicted. It's okay. You're not alone. :)

Obviously, guitars themselves are a significant part of the guitarist's gear-buying curse. I remember when I first started, I thought that having one electric and one acoustic would be enough. After all, you can only play one at a time right? Little did I know that different guitars - even of the same exact model - will both feel and sound different. Really, there are no two guitars that are exactly the same. Once you factor in different colors, shapes, pickups, and other components, it's possible to become a guitar-collecting fiend if you're not careful.

If you play an electric guitar primarily, then you probably already know that an amplifier has as much to do with your sound as does the guitar itself. And while it may be viewed as both a blessing and a curse, there are as many options for guitar amplifiers as there are guitars.

It's not just electric guitar players that can enjoy the benefits of amplification. For many years, many acoustic guitars have come equipped with on-board pickups and preamps to facilitate amplification and recording. As a result, many companies now offer dedicated amplifiers specifically voiced for acoustic guitars, many of which also include XLR inputs for microphones and other line level sources.

In addition to amplifiers, guitarists can employ external effects to modify their sounds. These effects can be found in pedal or 19" rack-mounted formats, though most guitarists currently favor effects pedals due to their small form factor and relatively low cost. Such pedals can do anything from altering your guitar's equalization to adding reverb, delay, or a host of pitch-altering effects.

If you have any questions about any type of guitar gear or need help with a purchasing decision, please let me know!

So Much Guitar › Guitar Gear