The bright twang of country guitar is as much a part of country music as are lyrics about being drunk, a cheating wife, and a broken down pickup truck. Country music is as American as music can be (though don't tell Albert Lee), and relies heavily on both acoustic and electric guitars as standard equipment. Though country music used to be the exclusive domain of the south, the popularity of this music has extended well past geographic domains. As a result, country-based guitar techniques - from banjo rolls to chickin' pickin' - have influenced a number of guitarists, country and non-country alike.

Although some ill-informed critics often associate country-style guitar playing with "lazy strumming" and chords not moved past the third fret, the techniques demanded by country music is more diverse than some would think at first. To master country-style guitar, one has to be proficient in a wide range of techniques, including single string technique, finger-style, hybrid picking (i.e. "chickin' pickin'"), as well as steel guitar emulation. Pioneers and virtuosos in the world of country music who have mastered some or all of these techniques include such diverse talents as Merle Travis, Chet Atkins, Roy Clark, Les Paul, Jerry Reed, Albert Lee, and Brad Paisley. 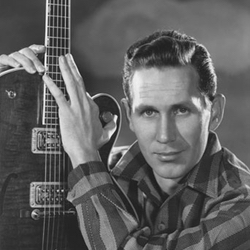 In much of today's country music, the traditional boundaries between musical genres have become blurred, so much so that at times it can be difficult to tell the difference between country music and pop or even rock music. Guitarists such as Johnny Hiland move between country, rock, and blues guitar with ease. Other guitarists such as the late Danny Gatton and Clint Strong play jazz and country equally well.

Both acoustic and electric guitars are common in both traditional and modern country music, though acoustics are generally used for rhythm support while electrics are used for soloing and fills, as well as rhythm. Although country music isn't known for producing guitar "shredders," players such as Johnny Hiland and Brad Paisley can burn with the best of them.

Please explore our section on country-style guitar further where you'll find recommended listening, books, free lessons, and equipment recommendations on how to get the "right" country sound, whether your instrument of choice is a Fender Telecaster through a Dr. Z Combo or a Gibson Les Paul through a Fender Twin Reverb.

So Much Guitar › Country Guitar