You've got to have the right blues guitar gear to get the sounds you want if you want to play blues guitar (though skill trumps gear every day). Fortunately, there is no one "right" guitar, amp, or setup - many different guitar players use a variety of different guitars to get the sound they want. Let's take a look at some of the more common choices to help you get the right sound. 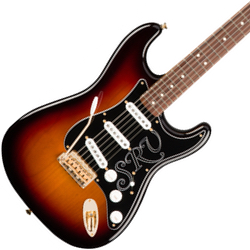 There are many guitars that blues players have favorited over the years. One of the most common since the 1970s has been the Fender Stratocaster. Everyone from Eric Clapton and Stevie Ray Vaughan to Kenny Wayne Shephard and Buddy has used the reliable Fender Strat as the basis of their sound. Its versatile and cutting tone have made it a favorite for numerous players. The Strat's "cousin" the Telecaster has also seen use with players like Albert Collins, Muddy Watters, and Robben Ford.

It seems clear that older players favorited Gibson guitars for a number of years - the ES-335, Gibson Les Paul (some say Clapton's best tone was during his Les Paul years), and even the Flying V have been favorited by such players as the "kings," B. B. King. Freddie King, and Albert King.

So really, there's no "right" instrument for playing the blues, though it's safe to say you won't find many pointed neck Floyd Rose equipped instruments in the hands of a blues master, but who's to say what's out of bounds? Blues guitar gear is secondary next to the skills of the player. 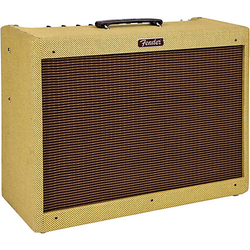 Like guitars, there is no one definitive "blues" guitar amp, though there are certain amp types that are more common than others. You generally won't find über high gain amps used in the blues realm, though older Marshall type amps are very common. Some players use primarily on clean tones. For example, B. B. King relied on the Gibson Lab Series amp or similar types that provided a very clean sound.

You will likely find Fender amps at the top of most players' lists. Common choices include the Twin Reverb, Blues Deluxe, and Bassman. Vox amps are also popular, with the AC15 and AC30 topping the list. Players as diverse as Eric Clapton and Stevie Ray Vaughan have used Marshall amps at some point during their career. And while they're out of reach for most players, Dumble amps have been the choice of players such as Robben Ford, Stevie Ray Vaughan, and John Meyer for many years. 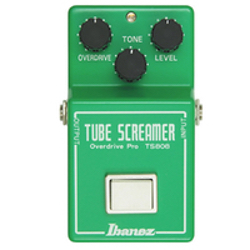 While blues players generally don't use a ton of effects pedals, there are a few pedals that many players tend to use. Without a doubt, the most copied effects pedal in history is the Ibanez Tubescreamer. Stevie Ray Vaughan made the Tubescreamer a standard part of his effects arsenal, and many players since have taken a cue for him. While it doesn't have to be a Tubescreamer (or one of dozens upon dozens of clones), most blues players tend to favor overdrive as a standard effect, with many players using more than one.

Other common effects include a wah pedal (its expressiveness lends itself to blues styles easily), echo/delay units, and vibrato, rotary, or tremolo effects. Blues players tend to avoid chorus, flanger, phaser, distortion, and other "extreme" effects. So while effects aren't the most crucial component in a player's blues guitar gear choices, they're still pretty important.

Some maintain that blues players tend to favor heavy gauge strings, and while it's true that players like Stevie Ray Vaughan used very heavy strings along with high action, it's not a "rule" that blues guitarists have to do so. Other players like Kenny Wayne Shepherd follow the Stevie Ray model, while others such as Eric Clapton tend to use lower gauge strings and lower action.