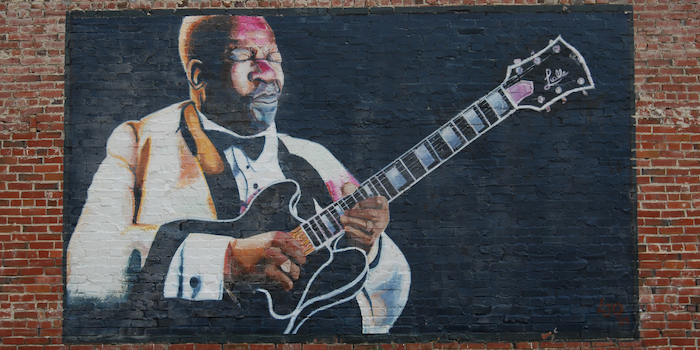 What Makes Someone a Top Blues Guitarist?

Making a list of top blues guitarists is a necessary evil in some ways. It's good for people who are new to the blues to have a starting point for checking out the music. Think about it. The first time we check out any new kind of music we ask people to make recommendations. So that's what this list is - just a list of my recommendations, but to be sure - the guitarists listed below would probably make anyone's list of top blues guitarists.

Though he only lived to be 27 years old, Robert Johnson nevertheless has rightly earned the title of King of the Delta Blues. His life, death, and music have become the stuff of legend, inspiring speculation and wonder for nearly 80 years after his death, including the story that he sold his soul to the devil for his musical talent. Johnson's recognition largely came after his death and for only 29 songs total. Players as notable (and diverse) as Eric Clapton and Jimi Hendrix have listed him as a significant influence.

It's a safe bet that no guitar player in the 20th century (or after) has had the influence of B. B. King. Born Riley B. King, he later adopted the name B. B. after he became known as the "Beale Street Blues Boy." This name was eventually abbreviated to "Blues Boy," which led eventually to "B. B." The son of Mississippi sharecroppers, King learned to play guitar in his early teens. A self-taught player, King began by playing in local radio stations. Known for his instantly recognizable lead tone and vibrato, King has influenced generations of blues, rock, and even country guitarists.

Known for playing a Gibson Flying V left-handed (though still strung right-handed, so the treble strings are on top) and utilizing open tunings, Freddie King is considered one of the masters of electric blues guitar. Though he often claimed to be related to fellow top blues guitarist BB King, the two were not family. He was a significant influence on fellow blues guitarists Eric Clapton and Stevie Ray Vaughan, though their commercial success greatly eclipsed his own. Of his many studio recordings, he is perhaps best known for "Born Under a Bad Sign."

Known as one of the unrelated "three kings" of the blues (along with B. B. and Albert), Freddie King possessed his own instantly recognizable style that makes him a recognized blues master in his own right. Possibly known best for his instrumental blues classic "Hide Away" as well as "Have You Ever Loved a Woman," Freddie had a fiery and powerful solo style that carried him from Texas to Chicago and back again. He was perhaps Eric Clapton's greatest influence, and also held sway over Peter Green and Mick Taylor. He died of natural causes at the age of 42.

Mississippi born Muddy Watters made a name for himself as a respected Chicago bluesman (indeed, usually considered the father of modern electric blues) with such iconic tunes as "I'm Your Hoochie Coochie Man" and "Rollin' Stone" (which, yes, inspired the band of the same name). He received his nickname Muddy - which evolved into perhaps the greatest blues name ever - due to his penchant for playing in muddy creeks near his home. He added "Waters" himself. By the early 1940s, Waters had moved to Chicago and was working a day job and playing the blues by night. Fusing the sounds of the Delta blues with the power of the electric guitar, Muddy Waters influenced a wide range of guitar heroes in his own right, including Eric Clapton, Jimmy Page, and Johnny Winter.

Born in Louisiana and eventually relocating to Chicago (lookingto find work as a janitor), Buddy Guy was discovered by the great Muddy Waters and became a staple of the electric Chicago blues sound. Noted for work with both Chess and Vanguard records, Guy is renowned for being a noticeable bridge between blues and rock music, with his powerful solo style, often taking long extended solos and often employed rock-style distortion. He influenced a slew of top blues guitarists as well as several rock players, including Eric Clapton, Jimi Hendrix, and Jeff Beck.

Known as the "Master of the Telecaster," Texas-born blues icon Albert Collins was a true original. He tuned his Telecaster to an open minor chord (F minor, to be exact) and used a capo as a standard part of his technique. He fused elements of Texas, Mississippi, and Chicago blues as well as rock and roll. He won a Grammy (along with Robert Cray and Johnny Copeland) for the album "Showdown."

Clapton easily fits into both rock and blues guitarist categories, though he probably would classify himself more as a blues guitarist, given his background. Inspired by such greats as B. B. King and Albert King, Clapton came to prominence in the 1960s playing with such groups as the Yardbirds and Cream and has had the chance to play with (and often upstage) his influences as one of the top blues guitarists on this list.

Though born and raised in Dallas, TX, Stevie Ray Vaughan made a name himself as a fiery Texas blues guitarist after he moved to Austin, TX. Influenced by such rock and blues players as Jimi Hendrix, Buddy Guy, and Albert King. Armed with a cache of Fender Stratocasters equipped with high action and thick strings, Stevie Ray Vaughan soon set the blues world on fire and came to fame not long after an appearance at the Montreux Jazz Festival (a performance that Vaughan did not particularly enjoy). With his band Double Trouble, Stevie Ray Vaughan enjoyed a brief but powerful career, impressing everyone from David Bowie to B. B. King. He died in a helicopter crash at the age of 35.