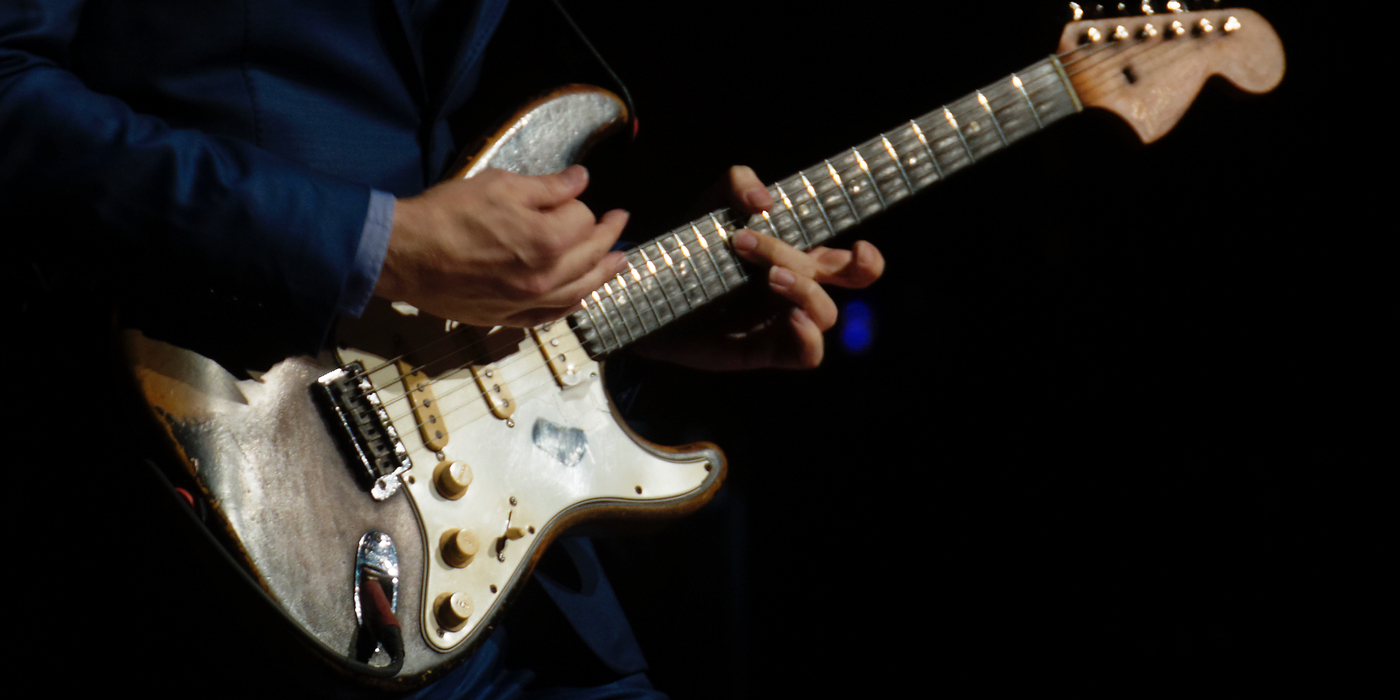 Blues guitar history and the blues in general is inseparable from the tragedy of African-American slavery. Supposedly, slave-owners actually encouraged their slaves to sing in rhythm because it helped keep certain kinds of work (e.g. chopping, hammering)  properly synchronized. Also, the slave-owners believed that singing helped keep the slaves "happy," so it was allowed.  For all the losses the slaves endured regarding their culture, fortunately for history part of their musical heritage was preserved.

Beginning of the Blues

Although the earliest forms of the blues are unavailable simply due to the lack of recording technology, there are many aspects of early blues - such as call and response - that are still readily seen in the blues today. It also goes without saying that the dreadful conditions that the slaves endured contributed to the subject matter and deep emotions of the blues as well.

Since the guitar vastly predates recording technology, the earliest recorded blues guitarists were certainly not the earliest blues musicians who used the guitar as their instrument of choice. With that in mind, the earliest recorded guitarists such as Sylvester Weaver, Charley Patton, and WC Handy definitely helped lay the foundation for guitar-based blues for the early 20th century and are crucial but often omitted figures in studying blues guitar history. Handy in particular helped standardize and transmit the blues due to his formal transcription skills.

Of course, no blues guitar history is complete without mentioning the great Robert Johnson (seen in the picture above), the subject of many stories and legends about his devil-inspired talent. Though some blues historians maintain that his influence may be exaggerated (i.e. he popularized more than innovated), his incredible vocal and instrument talents are beyond question. Apart from his musical talents, the stories surrounding Johnson and his "deal with the devil" as well as his early death only contributed to the mystery behind the man.

The Blues in the 20th Century

The early 20th century saw the standardization of the blues form, known as the "12-bar blues." While not all blues tunes conform to this standard, most do, and the advent of recording technology helped contribute to the transmission of this form. Furthermore, the popularity and availability of recordings made it possible for blues artists to embrace and learn new music that they otherwise might not have known.

The era was ripe for new blues artists, given the rise of the entertainment history around the time of the Great Depression. Similarly, Prohibition drove drinking underground to secret nightclubs, often accompanied by live music acts, including blues artists.

The Blues and the Electric Guitar

The evolution of blues guitar in the 20th century mirrored changes in the guitar itself. By 1940, the electric guitar was still in its infancy, but its popularity was growing fast, and it soon became clear that the electric guitar and the blues were made for each other. One of the first blues guitarists to make the switch from acoustic to electric was the great Muddy Waters.

Waters had been discovered by the ethnomusicologist Alan Lomax, who recorded Waters onsite in his home in Mississippi, inspiring the young bluesman to pursue a career in music. Waters soon moved to Chicago, where he embraced the electric guitar simply as a matter of practicality - he needed it to be heard! Waters would in time be heralded as the father of Chicago Blues, as well as a major inspiration on blues/rock guitarists of the 1960s.

While the "Chicago Sound" soon became a popular blues style, the mid-20th century saw the rise of numerous blues guitarists who would forever help redefine the role of the electric guitar in blues. Such artists include John Lee Hooker, Freddie King, and the master of blues vibrato, BB King, who would prove to be one of the most influential blues guitarists in music history. The power of this new generation of electric blues-men soon spread to the UK, influencing such players as Eric Clapton, Jeff Beck, Jimmy Page, John Mayall, and groups such as the Rolling Stones.

Soon, groups such as the Yardbirds, Cream, and John Mayall's Bluesbreakers would incorporate their blues influences into a rock and roll setting, forever changing the landscape of both rock and blues. In the states, a young man by the name of Jimi Hendrix would become an iconic figure in blues-based rock, influencing a whole new generation of guitarists both before and after his untimely death. Other figures who helped make names for themselves include Johnny Winter and Robben Ford, a versatile blues guitarist who has played with everyone from Miles Davis to KISS.

Of the post-Hendrix blues guitarists, perhaps no more influential figure is the late Stevie Ray Vaughan, a guitarist who many credit help keeping the blues alive during the shred metal and electronica era of the 1980s. Vaughan's influence on blues guitar history has been incalculable, with players such as John Mayer, Johnny Lang, and Kenny Wayne Shepherd making the blues accessible to a whole new generation. Although the blues was born out of a distinctly African-American experience, the universal appeal of both the musical style as well as the subject matter has allowed the blues to speak to a wide array of people, regardless of background.