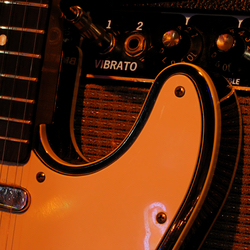 Understanding rock guitar gear is important if you're interested in being a rock guitarist. You have to work on getting the right sound in addition to the right licks and scales. This brief guide should help you get started, but if you have any questions, let me know!

When it comes to guitars suitable for rock music, there are a lot of guitars that are fair game. Most players tend to favor traditional choices such as the Les Paul, Stratocaster, or Paul Reed Smith. Even though the Telecaster is associated with country music, you've got many players who use it in a rock context. Just about the only guitars you won't see used as rock guitar gear are traditional jazz guitars, such as a Gibson ES-175. Large hollowbodies like the ES-175 are prone to feedback at high volumes and generally do not get the "bite" needed for rock music. However, semi-hollowbody instruments have been used by everyone from Eric Clapton to Eric Johnson with great success.

Personally, I own several guitars that I use for rock playing - a Les Paul Standard, Fender Strat, PRS McCarty, and PRS Custom 24 are some of my favorites. However, I'm usually found playing a Strat-style guitar with a bridge humbucker, middle and neck single-coils, and a vibrato bridge. I've found that this "Superstrat" configuration lends the most versatility when I'm playing with groups that tend to do a wide range of tunes. The bridge humbucker lets me get those over-the-top high gain tones while the single coils provide a lot of tonal versatility for other tunes. While I'm not a huge whammy-bar guy personally, a lot of tunes require them, so I'm usually playing a guitar that has one.

When choosing an amplifier for rock music, there's one main thing you need to consider in my opinion - are you going to get your overdrive and distortion tones from the amp itself or primarily from effects pedals? If you're going to go the amp route, then you need to find an amp that fits the style of music you're playing. If every song you play is balls-to-the-wall massive distortion, then a single-channel amp with killer distortion will be fine. If I'm doing a classic rock gig, I can be happy with a Marshall JCM800 and not much else. However, most players find that they want a bit more versatility. Good amp choices include models from Marshall, Mesa/Boogie, Bogner, and Peavey.

If you go the pedal route, then you need an amp that has a good and loud clean channel. There are plenty of amps that you can use for rock music if you use the right kind of pedals to get your overdrive and distortion tones. You can get great rock tones from clean Fender amps as well as models by Dr. Z, Carr, and other amp manufacturers that create "pedal-friendly" models.

Most rock guitarists make use of effects of one kind or another. If you're using a clean amp like a Fender Twin Reverb or Dr. Z Maz 18 you'll need at least one overdrive or distortion pedal to get good rock guitar tones, if note more. Other popular choices are a chorus pedal (used lightly) to give a nice doubling effect, an echo or delay pedal, a boost for solos, and a wah-wah pedal for more expressive solos. Effects pedals are really a personal choice, because some players use two dozen pedals to get their signature tone while others use none. One popular option - especially if you're trying to play cover tunes - is a multi-effects board, such as a Boss ME-80, that contains several effects in a single package.

Many rock players (myself included) have gravitated towards advanced modeling or amp profiling solutions, such as the Fractal Audio Axe Fx and Kemper Profiling Amp. Personally, these products changed my life as a recovering "gearaholic." Once I landed an Axe Fx II, I sold every effects pedal I owned (over 100) and all but one amp. It was that much of a life changer. I also bought a Kemper Profiling Amp, and in all honesty, I have no desire to go back. However, neither of these two options are cheap, and there is a bit of a learning curve. Still, the amount of sounds you can get is pretty incredible. If you want the ultimate in rock guitar gear, the Axe Fx and Kemper are worth a look.

In addition to the above necessities, rock players also like to often modify their gear to better meet their requirements. One common modification is replacing a guitar's stock pickups with aftermarket pickups by such makers as Dimarzio or Seymour Duncan. A whole industry has emerged with effects pedal mods, such as increasing a pedal's gain or changing its basic tone. Sometimes something as simple as changing guitar picks or string gauges can have a major impact on one's tone.