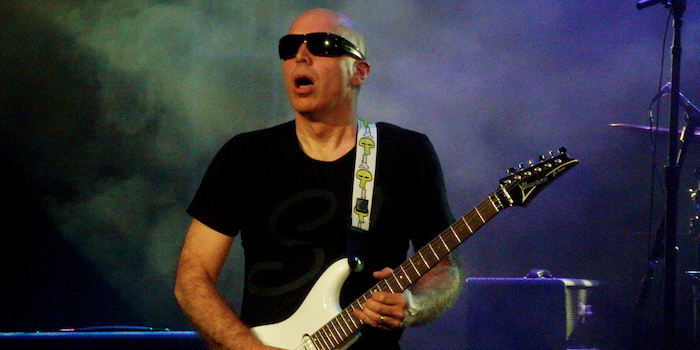 If you want to learn rock guitar there are several things you need to master on your journey to rock guitar mastery.

Personally, I think every guitarist should learn how the guitar fretboard is "put together" before they start to play. Not physically, but how it works. You should learn the basics of the musical "alphabet," i.e. the music notes (A, B, C, D, E, F, G) and how the guitar fretboard moves in a series of what are called half-steps (or semitones). Knowing what makes a note "sharp" or "flat" is crucial. It helps you understand basic patterns that will be with you during your entire time as a rock guitarist.

Along with this fretboard knowledge is understanding what a chord actually is and what makes it work. You don't have to go through four semesters of music theory like I did, but knowing how to construct chords (at least at a basic level) will really help you as you start learning tunes and perhaps even writing your own.

All rock guitar players use scales, whether they know it or not. Some guitarists, like Joe Satriani, know at every moment what scale or scales they're using. Others, like Ace Frehley, don't have a clue. Still, they use the scales whether they know them or not. Scales are simply groups of notes arranged in a particular pattern. These patterns create certain kinds of sounds that you can use in your solos or fills to create a certain mood. You should know that to start playing rock guitar you don't need to learn a ton of scales. Just a couple will get you going, but more on that later.

Learning rock guitar should be fun, right? However, just because it's fun doesn't mean it's not hard work. It also doesn't mean that your learning should lack structure. Instead of going to YouTube and watching a bunch of random videos, try working through a series of beginning rock guitar lessons that have been put together by a seasoned instructor. The advantages to this strategy is that you won't be jumping around from lesson to lesson, creating gaps in your playing.

Finally, you obviously should pick some tunes that you want to learn. After all, if you don't learn actual music, what's the point, right? However, you need to keep your expectations realistic. Don't set out trying to learn Van Halen's "Eruption" or an Yngwie Malmsteen solo. There are countless rock tunes that are pretty easy to learn after you've been practicing for even just a few weeks. Something like "My Sharona" or "I Love Rock and Roll" are great songs for beginners. Set realistic goals and learn to shred when you've got the basics under your belt.