Want to master rock guitar? First you need to concentrate on some rock guitar basics that I talk about below so you have a clear understanding of what's involved in learning and playing rock guitar. If you have any questions, please let me know.

The sound of rock guitar is relatively easy to describe. At least since the late 1960s, rock music has been characterized by the sound of an electric guitar plugged into a guitar amp set for either a mild to extreme "overdriven" or distorted tone. This sound was actually discovered by accident. Ray Davies of the Kinks had poked holes in his guitar cabinet's speaker cones with a pencil, trying to get a different sound. The "crunchy" sound he discovered would become a distinctive part of the rock guitar sound.

Most rock guitarists use sound-modifying devices called "effects" to get the wide range of sounds you hear in their music. Like the intro to Heart's "Barracuda"? That's a typical "flanger" sound. Dig the intro to U2's "Where the Streets Have No Name"? That's primarily due to an effect called "delay." Some guitarists have become almost synonymous with their effects. A good deal of Eddie Van Halen's solos wouldn't sound the same without a device called a "phaser" (and no, it doesn't kill people, unless they hate Van Halen). Still, the main sound of rock guitar is a distorted electric guitar, and that's something that every band from AC/DC to ZZ Top has in common.

Rock music is rooted in the blues, so it's no surprise that there's a good deal of crossover between blues guitar and rock guitar. With some players - Eric Clapton, Billy Gibbons, Jeff Beck - it's hard to even tell the difference. 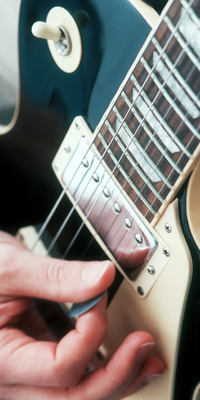 In rock music, there's a heavy emphasis on the strong beats (beats 1 and 3 for you music types). Rock guitar (and its "cousins" shred and metal) tends to favor partial chords called "power chords" that sound great with distortion. If there's any element to mastering rock guitar basics that you need to master first, it's definitely power chords.

Most rock tunes tend to have a guitar solo as well - usually after the second chorus. Some players tend to favor really fast and highly technical solos (like Steve Vai) while others gravitate more towards blues and more classic rock (like David Grissom). There really aren't any rules when it comes to a good solo except that it needs to take the song somewhere. A tasteful, melodic, and slow solo is a lot better than a thousand notes played with no style. But a tasty fast solo is better than a boring slow one.

Still, it's best for beginning rock guitarists to master different techniques so that they can play a variety of styles. But at the beginning, it's best to focus on developing a good sense of timing, learning a number of basic chords and how to use them, and playing some simple yet tasty guitar solos.

You'll also want to learn some basic scales. A scale, by the way, is just a grouping of individual notes played in a particular pattern. Some scales are harder to learn than others, but some of the most popular scales used in rock guitar are (1) easy to learn and (2) used by pretty much everyone, even if they don't know they're using scales.

While you don't have to plunk down a ton of cash to get started, there are a few essentials you need if you're going to start playing rock guitar. I plan to have some more in-depth articles on guitar gear for beginning rock guitarists, but for now the following advice should prove useful.

Obviously, you need a guitar. Preferably, an electric guitar. While I know it's tempting to buy the cheapest one you can find, you might be disappointed by its quality. These days, thanks to offshore manufacturing, you can find decent guitars for beginners for around $200 or so. If you're willing to buy used, you can find some great deals on Craigslist. Just make sure you take someone with you who knows guitar gear, otherwise you're likely to get ripped off. Squier and Epiphone make some really nice beginner guitars.

Finally, you want to make sure you have the right accessories. A guitar strap is mandatory, and a guitar stand is useful and inexpensive. You'll want at least a couple of guitar cords (one as a backup - trust me, you'll need one) and some extra picks and strings. Get a guitar tuner (also pretty cheap), and you'll be all set!