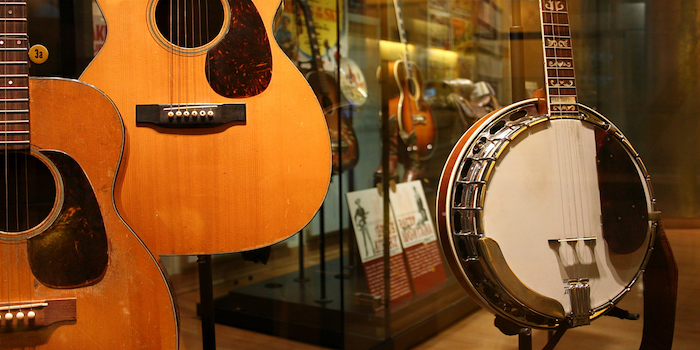 The role of the guitar in early country music was completely acoustic (since the electric guitar was invented until the late 30s), with the steel string acoustic guitar having gained in popularity during the early 20th century as well as becoming more affordable. Jimmie Rodgers, whom many consider the father of country music, made the steel string acoustic a cornerstone of his music.

During this time, Martin guitars were well on the way to becoming the standard for country acoustic guitar, though many players got their start with mail order guitars from Sears and Roebuck, which though not as well known for the quality were at least affordable for many young budding guitarists.

The 1930s saw the rise of so-called "honky tonk" and western swing varieties of country music made popular by such artists as Hank Williams (easily one of the most influential country artists of all time) and the Texas Playboys. Due to the Great Depression, record sales slowed during this time, so radio helped carry country music to a new audience, helped in part by the new Grand Ole Opry.

The Rise of Rockabilly and the Nashville Sound

Music evolves, and so it should be no surprise that country music would both influence and be influenced by changes in popular music (e.g. rock and roll) that arose during the 1950s. Rockabilly, with its fusion of swing, honky tonky, and "boogie woogie" became very popular as did the new "Nashville sound" with such players as Chet Atkins further developing and defining the sound of country guitar as did the jazz and country great Hank Garland. The birth and growth of Fender Musical Instruments saw the Fender Telecaster begin to surpass Gibson guitars as the defacto standard guitar in country music.

The 1970s saw the birth of so-called "Outlaw Country" as well as the rise of such players as Waylon Jennings and the great English country guitar master Albert Lee, who played with Emmylou Harris. On the heels of masters such as Lee came several virtuouso country players in the 1980s including Pete Anderson, Jerry Donohue, and jazz-country great Clint Strong.

While the fusion of pop and country became popular during the 1990s and early 21st century, players such as Brad Paisley, Johnny Heiland, and studio legend Brent Mason have shown that high quality country guitar playing is alive and well, despite what many have seen as a decline in "pure" country music. Any student of country guitar history will appreciate that it never stands still, but is always evolving in new directions.