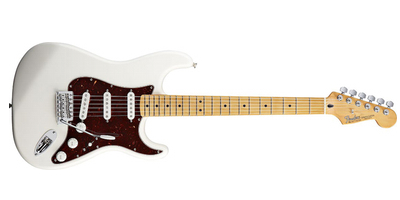 Fender guitars are easily the most easily identifiable (and most widely copied) electric guitar in history. Without a doubt, the Fender Stratocaster is the most influential and copied guitar ever designed. If you don't believe me, do a Google image search on "electric guitar." Easily half of the images are either a Fender Stratocaster or a design inspired by it. It's hard to believe that such a futuristic design was born in the 1950s, but thanks to the genius of Leo Fender, that's exactly what happened.

The Beginning of Fender Guitars

The Stratocaster (or "Strat") wasn't Fender's first mass-market design. That honor goes to what is now known as the Telecaster. Originally, though, the Telecaster-design actually had no name (hence the name "No-Caster") and was briefly known as the Broadcaster. Leo Fender drastically changed how guitars are produced for the masses. Rather than make guitars out of one piece of wood, Fender designed the parts to be interchangeable and easily replaceable for repair (Fender himself had been a former repairman). Even today, players will often exchange necks or other parts with the Fender or Fender-compatible guitars. Along with their main competitor, Gibson, Fender helped define the solid body guitar.

While Fender has become synonymous with the solid-body electric guitar, they also introduced quality guitar amps that have inspired countless imitators (from Marshall to Mesa/Boogie) and bass guitars such as the Precision Bass and Jazz Bass.

Still, it's the guitars that most people lust over. Fender instruments from the early 1950s to the mid 1960s are highly sought after, since these were the instruments made before Leo sold the company to CBS in 1965. Having played a number of pre-CBS Fender Strats and Teles myself, I can honestly say these instruments do seem to possess a certain "mojo" about them, but hardly enough to justify the thousands of dollars they now cost. Though still pricey, a Fender Custom Shop replica is a far better deal.

If imitation is the greatest form of flattery, then Fender  has been flattered more times than any of us can count.  Without peer, the Fender Stratocaster has inspired countless imitators, and while numerous improvements have been introduced over the years (locking tuners, high quality bridges) the sexy, futuristic shape of the Fender Strat has stood the test of time. Leo would be proud!