In the swing bands of the 1930s, the guitar was an acoustic instrument and relegated to the background as a barely-heard rhythm accompaniment. Although the names Fender and Gibson play prominently in the history of the electric guitar, it was another instrument manufacturer - Rickenbacker - that helped bring about the amplified electric guitar. 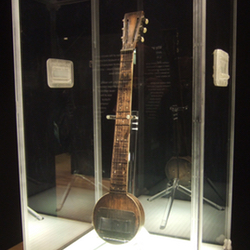 The Role of Rickenbacker

The so-called Rickenbacker "Frying Pan" was actually an electric Hawaiian guitar. Looking more like a heavy metal banjo than an electric guitar, the Frying Pan was born out of the desire to amplify one of the main instruments in Hawaiian music. So, the credit for the earliest electric "guitar" goes to George Beauchamp and Adolph Rickenbacker, though other makers wouldn't be far behind.

One such inventor was also a well-respected musician, the great Les Paul, who took it upon himself to deal with one of the biggest problems facing newly amplified electric guitars. You see, the Rickenbacker Frying Pan was just the beginning. Soon, hollowbody instruments (such as those favored by jazz guitarists) were soon sporting pickups to amplify their sound. Guitarists such as Charlie Christian helped usher in an entire new voice for the guitar. 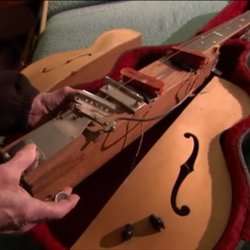 One of the main problems, though, with these amplified guitars was feedback, such to the point that many players even stuffed newspaper and other materials into the bodies of their guitars to squelch the unwanted feedback. Les Paul's solution was to mount the guitar's pickups (homemade, of course) directly to a piece of solid wood, a 4x4 piece of solid pine to be exact (hence the designation "solidbody" guitars).

He then cut the sides off of a regular hollow-bodied guitar and glued them to the sides to maintain conventional appearances. This guitar, affectionately known as the "Les Paul Log," was turned down, ironically, by Gibson in 1946, who only a few years later would partner with Les Paul to produce the famous guitar bearing his name.

It was Leo Fender though, an inventor and onetime radio repair shop owner, who made electric guitar history by introducing  the first mass-produced electric guitar to the world.

The Fender Esquire, a solidbody single pickup guitar, was introduced in 1950 and was soon followed by the Broadcaster and dual pickup Telecaster in 1951. Even today, the Fender Telecaster is used by country, blues, jazz, and rock players alike. The nature of the guitar's construction (a bolt-on neck attached to a solid body) meant that the guitars could be constructed cheaply and in bulk.

Not to be outdone, Gibson introduced their own mass-produced solidbody instrument the year after in 1952, the famed Gibson Les Paul, under the leadership of Gibson president Ted McCarty, who was president of Gibson from 1950 - 1965, in what many would consider to be Gibson's "golden age" of electric guitar production. Eventually, Gibson would further distinguish themselves from Fender guitars by introducing the humbucking pickup (invented by Seth Lover) into their instruments, eliminating the single-coil hum present in Fender instruments (though the distinctive sound of single-coil pickups was still preferred by many).

Neither the folks at Gibson or Fender rested on their laurels. Both continued to offer new instruments such as the Gibson Flying V and Explorer as well as what has become perhaps the most famous (and copied) guitar in electric guitar history, the Fender Stratocaster, named after Leo Fender's partner Don Randall who thought the name was futuristic and forward-looking. Apparently, he was correct, since the "Strat" is easily the most recognizable guitar shape in the world.

Of course, Fender and Gibson aren't the only players in electric guitar history. Companies such as Rickenbacker and Epiphone (now owned by Gibson) made significant contributions in the 1960s, both companies getting some love from a little band from Liverpool that you might heard of. The 1970s saw the rise of Asian imports such as Yamaha and Ibanez, and it's safe to that the 1980s was a veritable gold rush of electric guitar manufacturers, including a few new innovations such as the locking vibrato bridge. The 1980s saw the beginnings of such major players as Paul Reed Smith and James Tyler. Innovators such as Ned Steinberger and Ken Parker have also pushed the boundaries of what we should expect from the world of electric guitars.

Looking Toward the Future

Even more innovations abound today, with MIDI guitars (such as those offered from Carvin and Godin) as well as modeling guitars (the Line 6 Variax) providing players with a wide array of sounds. Still, most electric guitars obviously still pay homage to the innovations of the 1950s from companies like Gibson and Fender, both of whom continue to offer revised versions of their best-selling models.