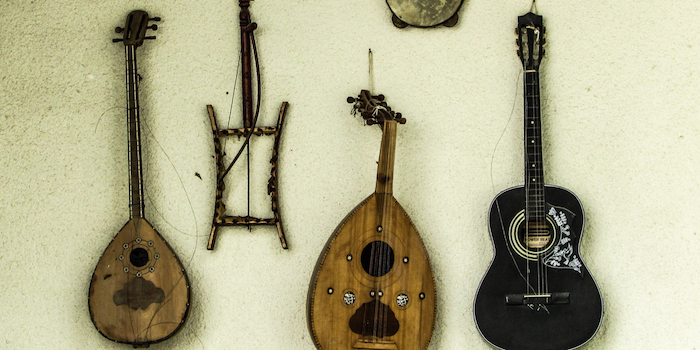 Interested in acoustic guitar history? If so, you might be curious to know that although the acoustic guitar in its current form is a relatively recent invention, a glance at the history of stringed instruments clearly shows that the basic form of the guitar has been around for thousands of years.

Of course, this assumes that a "guitar" is broadly defined as a stringed instruments whose strings are plucked or strummed to produce sound. Technically speaking, most historians maintain that the modern guitar's ancestry can be traced to the European lute and the oud, both used as accompaniment instruments; however, some have argued that the lute and guitar have separate lineages with the latter's ancestors having a greater impact on the former.

One of the most important ancestors of the modern guitar is a Spanish instrument known as a vihuela, which had six groupings (or courses) of strings (the 12 string guitar actually predates the six string!) and was tuned in fourths (the guitar is mostly tuned in fourths with the G-B strings being an exception). Its body shape also resembled our modern guitar.

While the popularity of the vihuela began to wane, the Baroque guitar (a five course instrument) rose in prominence, though they were used as rhythmic support in ensembles rather than as solo instruments. The Renaissance guitar, a less ornate instrument, generally had four courses. At the time, guitars generally had no more than 8 frets that were free from the body and could be played easily.

By the latter part of the 18th century, the guitar had become a six course instrument, with the double courses being replaced by single strings. By this time, the guitar's standard tuning (E-A-D-G-B-E, low to high) was in place and has been ever since.

Antonio Torres and His Influence

Without question, the most significant changes to the acoustic guitar were introduced during the 19th century by the Spanish luthier Antonio Torres, who made significant changes in the way the guitar was constructed (he invented the still popular fan bracing pattern), increasing the size of the body (making it a viable solo instrument) as well as changing the instrument's proportions to make it more comfortable for performers. Torres's contributions are still the standard for classical guitar construction to this day and are a significant part of acoustic guitar history.

As Torres's innovations became the foundation for classical instruments, other luthiers (most notably CF Martin and Orville Gibson) began experimenting with construction techniques that would ultimately improve the guitar's capabilities as a solo instrument.

As the guitar's popularity increased, so did the desire to use it as a solo instrument. Unfortunately, in larger ensembles, nylon-string guitars generally don't cut through a mix unless external amplification is used, which wasn't available at this time. While steel strings were available around 1900, the Torres-based classical instruments were unable to bear the increased tension. CF Martin, the founder of Martin Guitars, offered an X-braced pattern which could handle the string tension and became the standard still in place for steel string acoustic guitar construction.

What CF Martin did for flat-top acoustic steel string guitars Orville Gibson (and Gibson employee Lloyd Loar) did for the archtop guitar. Essentially marrying an acoustic steel-string guitar with a cello-inspired body, an archtop has a larger, hollow body, complete with the f-holes as seen on violins, cellos, and other stringed instruments. Archtop guitars also have floating, adjustable bridges, as opposed to the fixed bridges of traditional classical or steel-string acoustics.